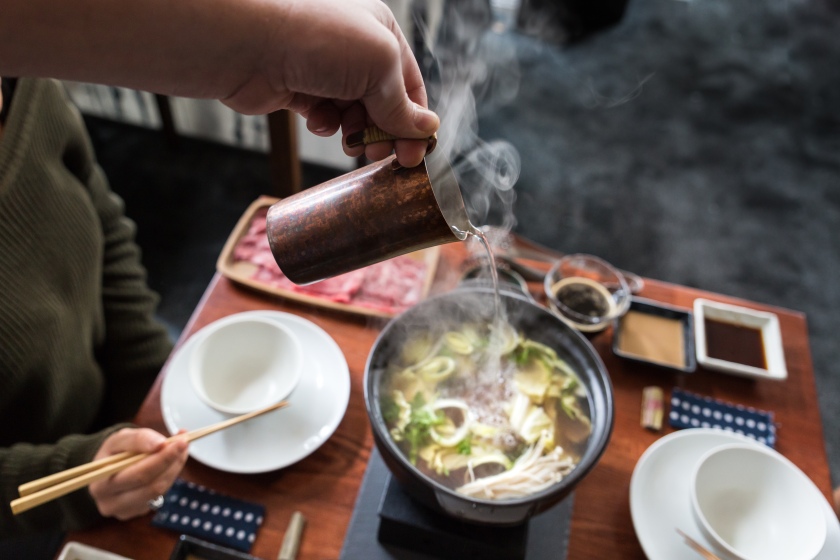 Master Den, the keeper of secrets at Melbourne’s Japanese dining and drinking destinations, Izakaya Den and Hihou, can finally reveal the hot secret he has been keeping a tight lid on. Master Den’s Poppu Uppu will open for a limited time on Wednesday 20 June in the site formerly home to Kappo, offering a fun, new Japanese hot-pot experience to keep Melburnians warm through winter.

The Poppu Uppu, a take on the Japanese translation for pop-up, is inspired by the special ‘nabemono’ dining experiences of Japan, where a pot is filled with broth and allowed to simmer, before vegetables and protein are gradually added to cook. There are dozens of varieties of hot pots, each with a distinguished flavour and style, and Master Den has created his own special versions of shabu shabu, a Hokkaido-style seafood nabe, and an elegant Japanese mushroom hot pot, that guests make themselves at the table guided by the friendly staff.

The Shabu Shabu features a konbu flavoured broth, with a plate of wagyu rump, topside and sirloin 6+, with the option to add speciality cuts like rump cap, scotch fillet and Japanese favourite, Cube roll. The Hokkaido style Seafood Nabe has a light miso flavoured broth, and is filled with Tasmanian Salmon fillet, local mussels and Mackeral, or add local flathead fillets, New Zealand pippies, Coffin Bay Oysters, Crystal Bay prawns and Harvey Bay scallops. The Special Mushroom Hot Pot comes with a konbu, sake and soy flavoured broth, silken tofu, and a selection of Japanese mushrooms including shiitake, enoki, shimeji, oyster, and king brown. All three hot pot varieties are served with an assortment of vegetables and accompaniments like wombok potato, spring onion, house-made special sauce (a must try!) and ponzu sauce, goma (sesame sauce), Momiji oroshi (Japanese daikon & chilli), and yuzu koshu (Japanese seasoning made from chili peppers, yuzu peel and salt). The hot pots are finished with Udon noodles, handmade by Udon specialist and Izakaya Den and Nama Nama’s original Head Chef, Yosuke Furukawa. Snacks will include sansho pepper edamame, coffee-cured salmon sashimi, tofu and shitake mushroom rice puff tempura, and a cameo appearance of Hihou’s fried chicken. Simon Denton, co-owner of Izakaya Den, Hihou and Master Den’s Poppu Uppu, has always had a strong affinity with Japanese culture and wanted to introduce the Japanese way of hot pot to more Melbournians. “What better winter experience than sharing a hot pot with someone you love, a group of your friends or family, on a cold Melbourne night”, says Denton. “It’s comfort food at its best – fun, unpretentious, and full of flavour and ritual”.

The drinks list has been designed to give guests many reasons to ‘Kampai!’. There will be cocktails, served from Master Den’s bar upstairs, Hihou, such as the ‘KITANO Beat’, a Negroni-style winter cocktail named after his favourite Japanese Actor Takeshi ‘Beat’ Kitano, made with Suntory Kaku whisky, Campari, Saika Kokutou Umeshu (Japanese plum wine), Patron Coffee and orange. Local and Japanese craft beers and sake that Master Den exclusively imports from Japan for his venues have been carefully selected to complement the different hot pots. A full-flavoured, but easy-to-drink Hitachino Lager goes perfectly with the Shabu Shabu, while a fruity Saison or the crisp and citrusy Wa Wa Wa Junmai sake from Nagano is best served with the Hokkaido Seafood Nabe. Award-winning Raffaele Mastrovincenzo, the original sommelier at Kappo, has put together a small, fun & delicious list of fresh ‘now’ wines to suit each of the Japanese hot pots. Guests can expect new releases, limited editions and quirky matches.

The space has been given a casual yet quirky makeover with some signature touches from Master Den himself. Master Den’s Poppu Uppu encourages bookings, but walk-ins are also welcome.