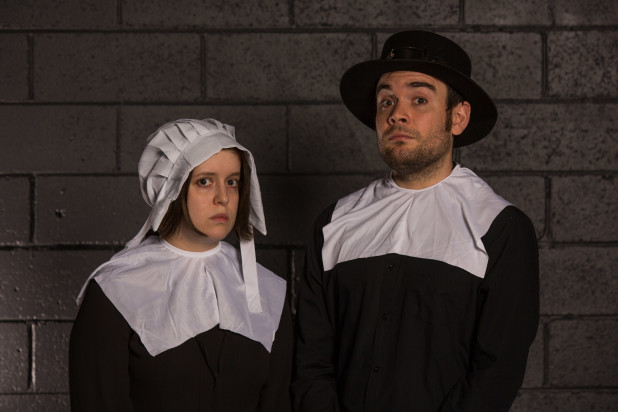 Last week we checked out Melbourne International Comedy Festival show Burn the Witch on it’s opening night at the Butterfly Club, a tale set in a small English Village in the 1650’s, a village which keeps experiencing the mysterious disappearance of their children.

Witchhunter General Dunlop and his comical, cockney assistant, Jennifer are engaged to get to the bottom of the conundrum and take the audience on a whodunnit style journey to get there.

Written by and starring Martin Dunlop and Bec Petraitis, Burn the Witch has a great story to tell, a story that unfolds naturally for the audience with intelligent jokes, ironic humor and energy in abundance.

The acting was brilliant, both Martin and Bec really engaged with the audience, and continued to hit the mark with their constant, sometimes dark, humour.

For us, the speed of the execution was the only let down, particularly at the 10pm timeslot, the narrative moved from scene to scene at lightening fast pace, which made it a little hard to follow.

And did they end up solving the mystery? You should really and check the show out for yourself to find out. Burn the Witch runs until the end of the Comedy Festival at the Butterfly Club.

Where: The Butterfly Club, 5 Carson Place
When: Every night, until 23 April.
More information & tickets: Check out the MICF website.