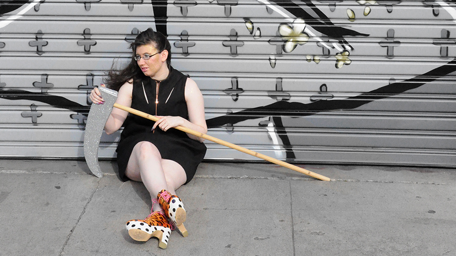 As an independent woman, taking charge of one of the most significant, and well let’s face it, last, major events of one’s life is a pretty huge, albeit important task. So, ‘after a (tiny) mental breakdown, Isobel Marmion decided to throw her own funeral (fancy dress and lots of glitter) rather than wait for her untimely and obviously impending death from one of the many illnesses she’s currently suffering from…’ which she goes on to list at the start of her aptly-named show.

Pre-show we are warned to brace ourselves for what is described as an ‘intimate look at mental illness and the fear of dying alone, but in an uplifting, funny way’ – this was delivered loosely wrapped around what comes across as an intimate 50 minute long confessional.

From this description, and as the show unfolded in front of us, it became clear that it was less about the funeral, and more so about Isobel’s very real struggle with mental illness – balancing bipolar disorder in a society which demands high function, something that Isobel appears to have a hold of in the way that someone might throw forward jokes to cover up awkward and uncomfortable moments.

Let’s face it, we’ve all been there.

IMFAITGIIWT (the official acronym) is like stepping into Isobel’s bedroom for a girly sleepover, sharing her deepest darkest secrets, fears and feelings, and watching her give birth to a three-litre bottle of milk full of glitter.

It then goes out with a glorious, pyjama-clad, boss-shoe wearing bang.

When: Until 25 September
Where: Courthouse Hotel, Melbourne
More Information: Check out Isobel’s website