Twelve years ago in Washington a team of gamers from Penny Arcade came up with the concept for a convention exclusively dedicated to gaming to fill a niche that was overlooked by comics, anime and, in their words not ours, other cool nerd hobbies – and thus PAX was born – attracting 4,500 people in its first year, and doubling every year after that until it had to move to Seattle and Boston.

PAX is now proudly the largest gaming event in North America. In 2013, PAX hit the golden shores of Oz (and by that we mean Australia) where it’s now an annual event, and goes from strength to strength. This year, PAX Australia runs from 4-6 November, 2016 at the Melbourne Conference and Exhibition Centre.

This mega-convention offers something for every, single type of gaming you can imagine including a Consol Freeplay area, where PAX attendees can hit up literally hundreds of the latest gen, classic and lesser known games during their time. More a fan of the handheld device, never fear, just pull up a beanbag, pull out your 3DS, PSP or Vita and play away in the Handheld Lounge.

Like your games totally PC? The organisers have that covered too, with a large-scale, high-end PC Area for your personal computer gaming pleasure. Finally for those who like their gaming old-school, hit the Tabletop area for a spectacular range of board and traditional games which you can play with friends (play nice guys) and even check out like you would in a library.

PAX doesn’t stop there, they also run what is called an Omegathon. What’s that you ask?Omegathon is a bracket style tournament, pitting 20 randomly selected competitors (or Omeganauts) against one another over the three days, in games from all categories.

On the final day of PAX, the finalists fight it out on the big stage, closing the event with their gaming prowess awesomeness. Yep. Sounds epic alright.

Just when you thought that was it, PAX also offer a range of panel sessions from experts in anything to do with gaming, PLUS cool-as ‘nerd-core’ music concerts. 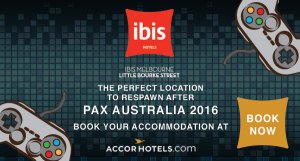 If you are heading to PAX this year, why not book some accommodation close by so you can enjoy every, single minute of it. Ibis Melbourne, Little Bourke Street offers a super-affordable, comfortable option within 20 minutes’ walk, or a quick tram ride on the number 96 from the venue. Check out the best available rates here.