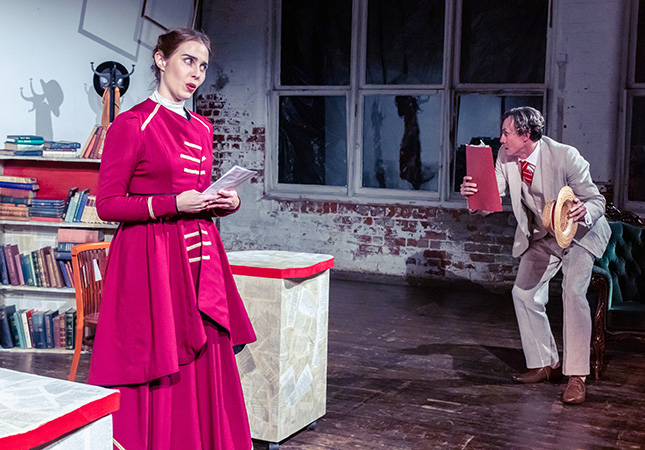 The word ‘travesties’ – meaning false, absurd or distorted representations of somethings – is a concerning name for a theatrical production. Knowing little about the play and its themes, I showed up to opening night hopeful that a degree in history wouldn’t be required to understand it.

The immersion began as soon as I entered the theatre; the set had been arranged so that I had to walk through the furniture and props to get to my seat. This was a pleasant stunt. However, what was truly impressive was the cast. The actors were already on scene and embodying their characters, equipped with fastidiously picked costumes and props. Patrons were left to walk amongst the cast while getting drinks and finding seats.

The moment the play began, I found myself in a state of utter confusion. Hit with a flurry of dialects and thick accents, I couldn’t understand the characters much. Thankfully, after a few moments everything became clear and made sense.

The story was told through flashes of memory as the main character wrote memoirs detailing his time in Zurich when he was young. The big names he encountered and the zany things they got up to form the meat of the story. We met Henry Carr (British consular official in Zurich), James Joyce (Irish writer in the midst of writing his masterpiece, Ulysses), Vladimir Lenin (Russian revolutionary leader and Bolshevik), Tristan Tzara (a central figure in the artistic movement known as Dada), and more.

One by one, the characters met, all of them gripped by grand ideologies that compelled them to butt heads with one another. A whirlwind of debate unfolded, grappling with topics such as patriotism, politics, war, art, nature and religion. Pondering such heavy subjects for two hours might have grown dull, had the experience not been packed with so many laugh-out-loud moments and spectacular stunts.

Travestiesis an apt name for the story, although the production was far from one itself. Put on by Bloomsday in Melbourne, the play boasted every aspect of a master production: actors worthy of packed stalls, a unique set and atmosphere, and pin-point accurate timing in music and lighting effects.