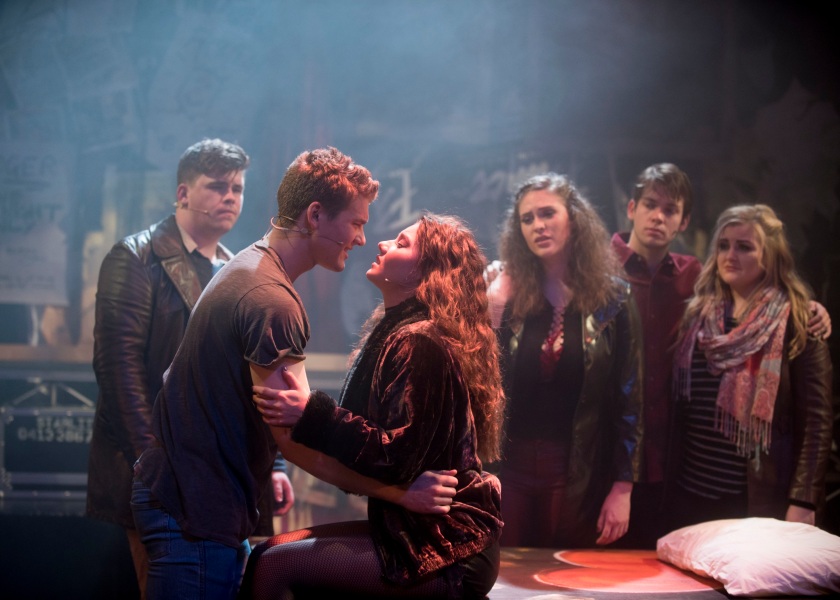 Last night I climbed the stairs to the Athenaeum 2 theatre to check out the Federation University student performance of RENT. Don’t judge, but for someone who adores musical theatre, I’d never seen this iconic show, so it was fairly safe to say that, I was pretty excited to be seeing it for the first time.

Most people are familiar with the premise of RENT. Set in the late 1980’s, in the colorful Alphabet City precinct of New York’s bohemian East Village, a group of struggling, penniless artists live, love and try to survive.

Ahead of its time, RENT looks at the fear, horror and loss associated with the AIDS epidemic of the time, and lightheartedly tackles topics like sexuality, drug addiction, homelessness and corporate greed.

Performed in a relatively intimate space, the set was super funky, with the audience members sitting right up close to the action, allowing the cast to interact with them on a more personal level.

The cast was nothing short of brilliant, each performer perfectly matched to their character, and the story was brought to life with boundless energy and seamless scene, chorus and character changes.

The acting was superb, the singing, on point, my only critique would be that the group choreography was a little sloppy, but as the pace was so fast it was very hard to notice, and it sort of added to the rawness of the story itself.

These guys are a hugely talented bunch of individuals, I can’t wait to see them in major productions in the coming years. 4.5-stars!

RENT wraps up this week, but be quick, it was a sell out last night and seats are limited.

Where: Athenaeum 2 – 188 Collins Street, Melbourne CBD
When: 8pm until 6 May, 2017.
More information & tickets: Available via Eventbrite