The Langham and Wedgwood have collaborated to launch the bespoke version of the afternoon tradition – “The Langham Afternoon Tea with Wedgwood,” and last week the We Know Melbourne team went along to try it out.

Now if you’ve never been to an afternoon tea and are wondering what the fuss is all about, then we’d highly recommend you book yourself in for this afternoon tea at The Langham.

Upon walking up the grand staircase of the hotel, we were instantly hit with the crisp, sweet ginger flower signature scent which set the scene of the decadent events to come.

Sitting down to the tea in the Aria Bar and Lounge, we were immediately offered a glass of Perrier Jouet NV Champagne and given a menu with an extensive selection of teas to choose from. It was then we started to notice all the Langham signatures, like the pink roses, the “Langham Rose” Wedgwood china, and later the Langham pink suits worn by the service stylists, reminecent of the pink Chanel suit  worn by the late, Jackie O.

We were then treated to a brief presentation by Managing Director, Ben Singleton who explained that today wasn’t just about the delicious treats that we would be eating, but rather about the tea itself. We weren’t just going to be served by ordinary waitstaff, but rather tea sommeliers who had undergone an extensive 8 hour Wedgwood training course to pass an exacting exam on the art of making tea.  If we looked carefully, we would be able to identify them by their distinct pair of Wedgwood cameo brooch or Wedgwood cufflinks for the males. Showing off their expertise knowledge, the tea someliers had no problems recommending teas off the menu and their suggestions were perfect. 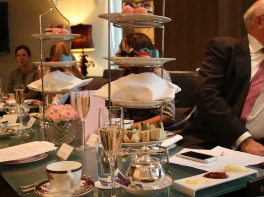 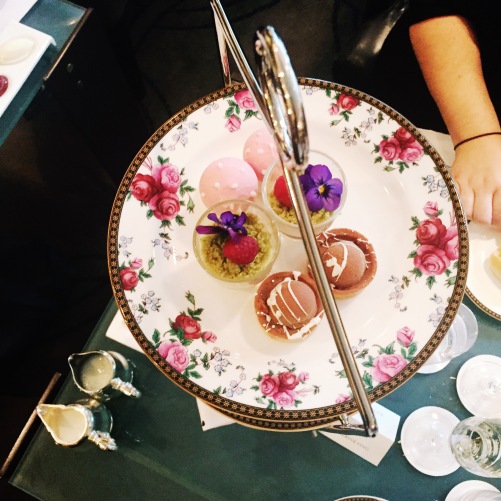 To accompany the tea, we were served a four tiered cake stand, laden with a selection of savoury sandwiches,  scones and dainty and delicate pastries. Each layer of the stand was carefully thought out and beautifully presented – from the freshness of the sandwiches and their fillings: Salmon, cucumber and horseradish creme fraiche, free range chicken with chives and lemon thyme, free range ham with tomato chutney; to the breakaway and melt in your mouth buttermilk scones with clotted cream and strawberry and rose petal preserve. But the real delight for us were the dainty delicate pastries on the top. Almost too pretty to eat, almost we said, each was to die for. Our favourites being the Mushroon shaped meringue with Chantilly cream, the passionfruit and mango macaron and valrhona Manjarri chocolate sphere, hazlenut and sable biscuit.

Two hours later, we were so full we could barely move (totally our fault for having a big lunch before), but we walked away wishing we could do afternoon teas at The Langham everyday. We felt completly spoilt rotten by the friendly and attentive tea sommeliers and staff at the Langham and would recommend it to anyone in Melbourne who wants to treat themselves (or someone special) to an afternoon of pure decadence.

Where: The Langham Melbourne

Cost: $55 per person with Wedgwoood tea, Langham blend tea and Espresso coffee including a glass of sparkling wine.

$69 per person includes a glass of sparkling wine and replenishment of high tea dishes.

$79 per person includes a glass of Perrier Jouet NV Champagne