Each woman represented a distinctly different take on what their view of feminism was, which resonated with much of audience on an individual level and the Q&A that followed allowed us to gain a little deeper insight into the mind of these proud, passionate women.

The show was a sell-out, Howler – a great location for this panel / performance was packed to the rafters with about 95% ladies – with a few supportive men dotted throughout.

At the conclusion of the panel session, Melbourne Playback Theatre took centre stage for their improvisational piece – performed by an entirely female ensemble of actors and musicians for a powerful out of the box piece designed not just to recap the messages from the night’s discussion – but enhance in an artistic sense. 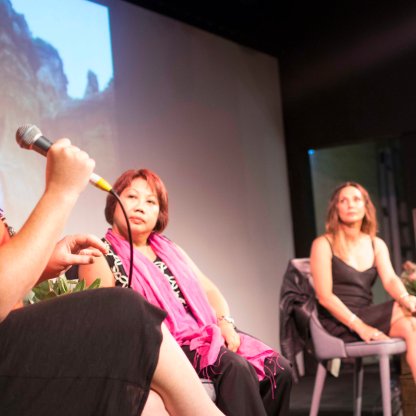 It was improv, but not as you would traditionally know it. Women from the crowd were encouraged to throw out key themes that they had been inspired by that night, or perhaps words the were reflective of how they were feeling in  the present moment.  Words like ‘strength’ were communicated back to us in the audience via words, music and dance – in an effort to capture the beauty and the depth, of what us everyday women should and could be feeling.

The F-Word is just one of a series of similar style of shows scheduled over the coming months to cover important social milestones like Sorry Day, Mental Health Week and Science Week. Established for over 30 years, Melbourne Playback is a not-for-profit organisation that operates in the corporate, government and community sectors to “use personal stories and the principles of improvisation as ways to awaken new perspectives.”To find out more about their upcoming performances Visit their website here.