When we heard that the boys from New York’s most famous speakeasy were coming to Melbourne, we couldn’t help but get excited, and so did the rest of Melbourne it seemed. Tickets sold out (or should we say booked out – entry was free) within minutes and we were lucky enough to secure tickets for the first session.

Now, we’ve visited a whole lot of speakeasies on previous trips to the US, and we had heard about Please Don’t Tell, but low and behold we never got there. Call it what you will, but we think this was definitely a sign, that we had to go!

In case you don’t know what a speakeasy is (one of our friends who came along actually had to google it first), old mate, Wikipedia defines it as:

“an establishment that illegally sells alcoholic beverages. Such establishments came into prominence in the United States during theProhibition era (1920–1930).”

Although these days, it would be more used to describe bars with a retro style, think something out of the 1950s that only “people in the know” know about.

Please Don’t Tell set up at the Black Pearl Bar Fitzroy, who’ve built up their reputation on shaking up some of the best cocktails in Melbourne. In New York, Please Don’t Tell is entered through a phone booth in Crif Dogs (a hot dog joint) , and to keep with this tradition, Black Pearl set up the same (minus the hot dog joint). Up the stairs, and next to the back door was the red phone which we had to dial before being entering. Once the secret door opened, wew were transported into a whole different era with the staff dressed 50s style and the boys Jim Meehan and Jeff Bell from PDT ready to mix up our concoctions.

We were lucky enough to sit at the bar with front seats for the infamous cocktail show (and got a few words in with Jim, when he wasn’t too busy). The menu delighted us with a whole lot of traditional cocktails but with a twist. Bundaberg Rum was the flavour and cocktails included some unique flavours like the Jan Collins with mandarin (our favourite) and Tying the  Sheets with green walnut, preserved figs and Spanish Brandy.

Bluebonnet BBQ was in charge of the food, and served up good old American Style gourmet hot dogs. While the dogs were tasty and just the right amount of carbs to wash down our cocktails, we were a little disappointed that they were cold. But luckily we were there for the cocktails not the food. Before we knew it, our two hour session was up and our little slice of a New York experience was over. It’s easy to see why these boys have such a cult following, we’ve got to say those cocktails were some of the best we’ve ever tasted. 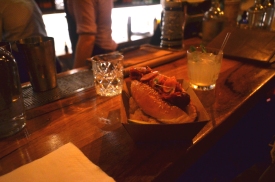 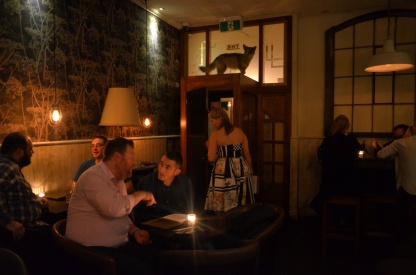