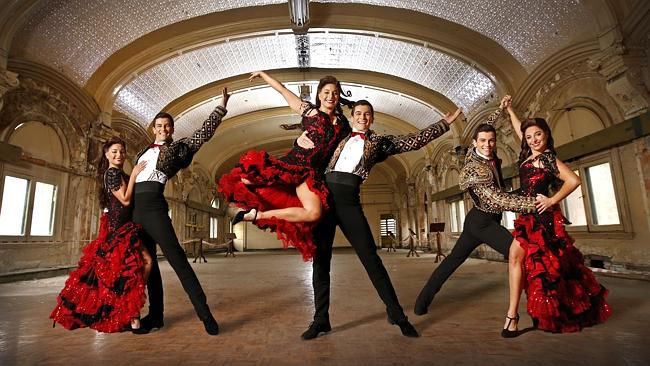 Strictly Ballroom tells the story of dancer-in-training since childhood, Scott Hastings as he faces the challenge of gaining acceptance for his creative dance steps in the competitive world of ballroom dancing.

At heart, Strictly Ballroom provides audiences with an inspirational message—”a life lived in fear is alifehalf lived”—in the form of a romantic comedy. Scott (played by Thomas Lacey) joins with amateur dancer, Fran (Phoebe Panaretos), to beat the repressive nature of ballroom dancing and create acceptance for creativity and attitudes outside of Australian ‘norms’.

Strictly Ballroom was first revealed in a stage play co-written by Baz Luhrmann and his fellow National Institute of the Dramatic Arts (NIDA) colleagues in 1984. The play received critical acclaim and Baz Luhrmann later transformed the story into a hugely popular film in 1992 that won many national and international awards and the hearts of audiences worldwide.

If you loved the film, Strictly Ballroom, you’ll likely really enjoy the musical too. The show is full of all the great songs—Love is in the Air and Time After Time included. The costume and set design really stand out imbibing the show with all the glitz you’d expect from the world of ballroom dancing, and the show is a really fun romp with fantastic choreography and laughs throughout.

Yet, there’s something about the musical that slightly misses in comparison to the film—maybe it’s just that the film was so good and the musical is that little bit less so? Scott’s dancing is not quite up to scratch in the show and the musical numbers come across as a bit disjointed making it more of a stretch than the film to get and remain fully engaged from the first to last number.

These small criticisms aside, Strictly Ballroom The Musical offers fun entertainment with an enduring and inspirational message that will appeal to audiences of all ages. It’s really uplifting and puts a smile on your face.

1) Don’t miss the chance to join the cast in the final song and dance number. It will make the show seem that much more special. To participate fully, grab a seat in the stalls (ground floor closest to the stage) so you can jump on the stage at the end of the show.

2) And don’t forget to grab a photo using the ‘head-in-the-hole’ photo stand-in on the first floor foyer, like our photo below.

To book tickets:  ask your hotel concierge or receptionist to book your tickets or book online at http://www.ticketek.com.au

Getting there:  A short five-minute walk from The Swanston Hotel Melbourne Grand Mercure or Hotel Mercure Welcome Melbourne. Consider jumping on a tram if you’re coming  from the Grand Hotel Melbourne or Hotel Ibis Melbourne Little Bourke Street.